Highway to the pleasantly surprised zone... 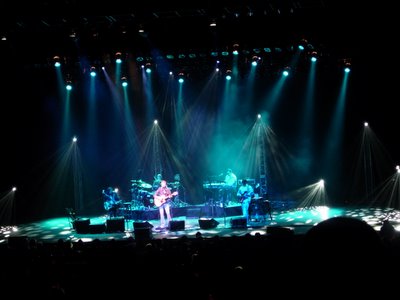 Our friend Rachel called the other day and told us that she could get some free tickets to see Kenny Loggins with the Pointer Sisters as an opening act.

Kenny was great too... but of course you don't sell gold and platinum records if you are merely okay... well at least in the 80's you didn't... not like today's manufactured stars. I'm under no illusion that there weren't manufactured stars back then... it just seems like today they decide the image, songs, lifestyle, etc... then just insert warm body...

Anyway, I could tell Kenny was trying to separate from his old stuff as he has some knew music out or about to be out... and it wasn't bad... I got my "Footloose" fix right before the encore so that was cool... though he only played a little of "Highway to the Danger Zone." I still had the image of him with the buzzcut and big aviator sunglasses... he looks much different now.

When I told my buddy Victor I was going he asked me if that type of music fell into the genre of Wussrock or Spazrock... sheesh... I still had to laugh though.