Mt. Charleston is the 8th most prominent mountain in the United States with 8,259 feet of prominence with the peak reaching 11,918 feet.  I approached from the South Loop Trail starting at just under 8,000 feet.  I had been preparing for this hike solo, committed to complete it before moving to the D.C Metro area, planned my Saturday and got up to the trail head about 9:00am.  After finding parking and gearing up I was on the trail around 9:15.  The initial part of the South loop is enjoyable with some moderately steep areas and several switchbacks.  It is at the halfway point that you reach about 10,000 feet and the rest of the hike to the peak never dips below this.


For fuel I brought several cliffs bars, a couple tins of sardines and a hostess cherry pie as the symbolic cherry on top, only to be devoured upon reaching the peak.  For motivation, I brought my will and an Iphone with over 4,000 songs.

At about 3/4 of the way to the peak I hit a minor wall where hiking seemed to be transitioning to trudging with small cracks forming in my determination to reach the top.  But as with any goal you must keep pushing through to achieve it and with a little mental determination trickery and a switch from shuffle to a more motivational mix I pushed through, all the while with a small voice in the back of my head asking, "I think I have enough fuel to get to the top but enough to return in a timely manner?"


After the half way point to the peak I saw only a handful of hikers... one from Tennessee in Vegas for an IT conference sitting exhausted on a fallen tree, another whom I had seen many times before jogging the entire loop as he does every weekend. Two soldiers from Nellis AFB running the trail, listening to MP3 players and singing at the top of their lungs and finally an older triathlete who looked a bit like Ted Kazinski, but with a much friendlier demeanor.

As I reached the base of the final summit, I came across a plane wreck that I had heard about but had no idea of what to expect.  Apparently the twin engine prop plane crashed in the 70's and because of the altitude, etc the wreckage was left alone. A bit of an eerie sight.

The crash also signaled the final clime to the summit which would be difficult considering the altitude, steepness and the fatigue I felt from the journey so far.  It didn't help that an unexpected and strong chilly wind was blowing across the peak from the Pahrump side, and the one thing I forgot... a wind breaker... not much good in the car trunk.

I finally reached the summit just before 5 pm, a little longer than I would have liked to take to reach it but with goal realized I was happy to mark my record of accomplishment in the summit log and enjoy my Hostess Cherry Pie!

The picture above shows me in the dugout built to protect hikers from heavy crosswinds. After spending about 20 minutes at the peak it was time to head back... upon completion the entire hike would be roughly 17 miles round trip.  I was happy to start my decent and hoping I had enough gas to overcome the long trail back.
It began to get dark about 3/4 of the way down but fortunately, while I forgot my windbreaker, I did not forget my headlamp.  By the time I got to my car I was running on fumes and had just emptied my camelback.  After a hot shower I slept soundly having accomplished my goal and thoroughly worn myself out.  If you are planing on making this hike, and it is rated strenuous or a 4 out of 5 make sure you are in good shape and have prepared yourself for the elevation. Bring plenty of water and food and have a great time.  I certainly did.

Hikes around Mt. Charleston and the all important Apres-hike!


It is interesting that when arriving in a new area I have always been driven to explore.  Then there is the settled in period where my drive to explore the area immediately around me fades and I begin to look outward for new adventures in neighboring states and countries to fulfill my need for new experiences and knowledge.  This month I have arrived at the end stages of living in my current town of Las Vegas where, as the realization that I will be moving far away hits, my urge to get in everything I can before leaving kicks in.  A travelers version of a "bucket list" as it were.  Restaurants I haven't tried or been back to in some time, a photographic exploration of the good, bad and ugly of Las Vegas, hiking the several peaks accessible to the public and the many other things that cross my mind.  At the forefront if they are important and attainable, back into the aether if fleeting or unrealistic.

Hiking to a major peak in the Mt. Charleston area was one of the items on my traveler's bucket list.  I am admittedly in okay shape and continue to work on bettering myself as I come to the realization that people I know in my age group are beginning to suffer the consequences of physical neglect or abuse of their person.  I would much rather suffer the mild pain of prevention than the intense, expensive and lasting pain of consequences.  So why not go from 0 to a 9.5 mile, 3500 foot elevation hike on a nice Sunday afternoon all with the help of meetup.com and Hiking Las Vegas.

As a long time member of Meetup.com (free) I was browsing the various hiking groups for my area and landed upon Hiking Las Vegas and the 52 Peak Club.  With 1,220 members and regular outings scheduled throughout the week it looked like a competent and committed group.  On a Saturday evening I joined and grabbed the last spot on a 20 person hike to Griffith Peak at an elevation of just over 11,000 feet.  Arriving at a park and ride at 7:00am the following morning I met a congenial group of hikers that quickly organized and split up into "green" car pooling groups considerate to other hikers and the limited parking at the south loop trail head that leads to both Griffith and Charleston peaks.

We arrived at 7:40 and already the lot was nearly full.  With my Camelback on and my Merrell barefoot run trail glove shoes that weigh less than 9oz each I was off... and needless to say I was not leader of the pack.  While not attuned to this type of elevated hike, nor in excellent shape, I am also not a quitter and I was determined to reach the peak.  With this in mind I also wore my heart monitor so that I could maintain an aerobic and sometimes anaerobic heart rate without pushing into maximum or beyond which can easily be done on this hike.  Approaching maximum is not effective in increasing cardiovascular fitness and can present dangers.  So, push my pace, make it to the top and keep the engine below redline was my strategy and it paid off.

It was very satisfying to reach the peak and place my note in the summit logbook with the many others.  There is something magical about being at the summit of something.  Be it standing on the roof of your house, a step ladder in your kitchen or on top of an 11,000 foot peak it lifts not only your perspective but your perception as well... even the crushingly mundane and familiar is presented in a different light and allows you to see something anew or live in the moment as your kitchen, neighborhood or city moves from everyday scenery to something that calls for your attention.

You start to notice all the interesting things that surround your everyday life while living in the moment... 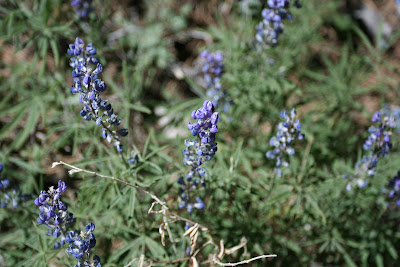 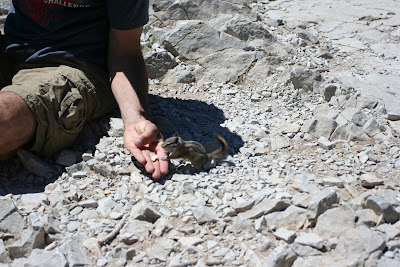 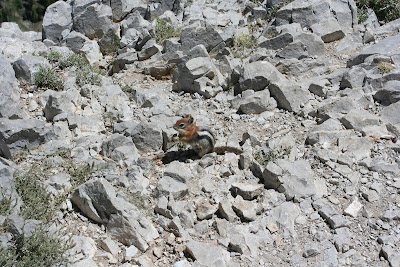 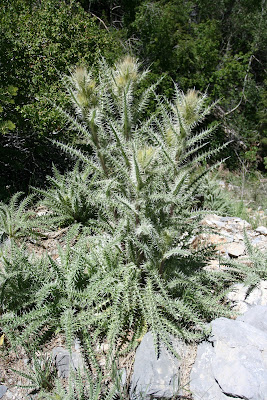 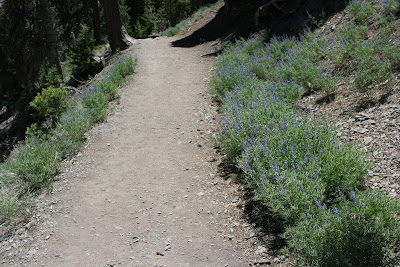 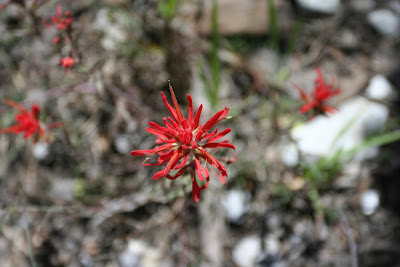 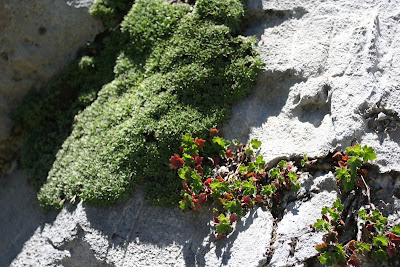 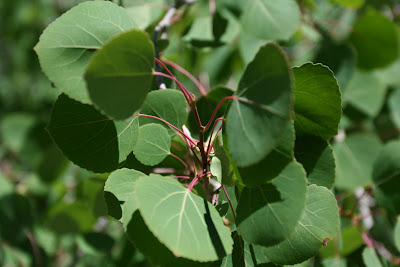 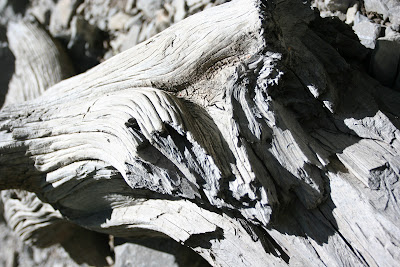 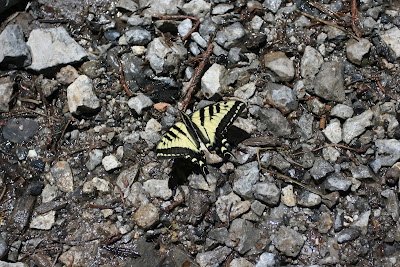 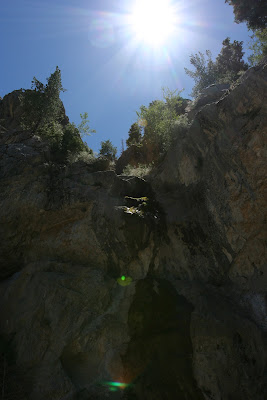 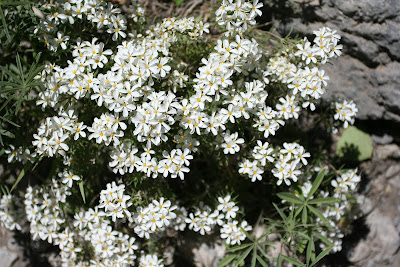 ... And after communing with nature, hiking till you nearly drop while getting to know your trail mates and accomplishing something together, a comfortable place to rest your backside and have a bite to eat and a drink is welcome.  Just past the trail head is the Mt. Charleston Lodge with excellent views of Kyle Canyon from both outside and inside eating areas.  After a long hike there is nothing better than a medium rare buffalo or elk burger and a cold pint served with a smile by barkeeps Dragon or Moses at the best Apres-hike on the mountain. 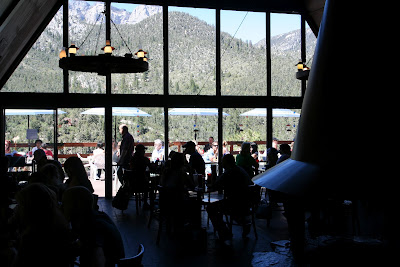 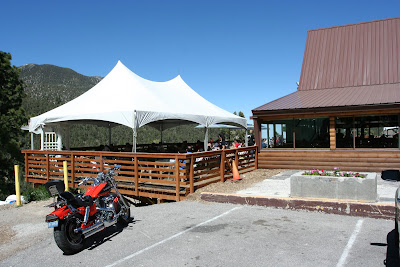 Posted by Ted Madsen at 6:32 PM No comments: 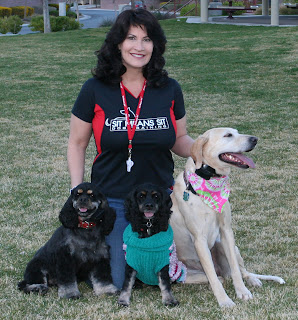 After spending several years in the West, I will be moving back East to Northern Virginia as my wife is launching a Sit Means Sit Dog Training franchise in Fairfax, Virginia.  As a Fairfax High and Old Dominion University alumni I am excited to return to my old stomping grounds though I cannot imagine how much things have changed since I moved away from Fairfax in 1988.  My wife is very excited to help families and individuals have better experiences with their dogs.  We have owned several dogs and have 3 now... two American Cocker Spaniels (Jazz and Koko) and one Yellow Lab (Chance).  As dog owners we have gone through the process many of our clients will inevitably go through before contacting us... trying pet store brand obedience, treat and clicker brand obedience, do it yourself, etc.  It is amazing how families will change their routines around undesirable behavior because they haven't discovered the right solution.  Sit Means Sit is the right solution.

Before my wife became a Sit Means Sit Master Certified Trainer, we had tried all sorts of programs and techniques and at best they were moderately effective.  With Sit Means Sit, the results are nearly immediate, long lasting and transferable to other family members creating hope, happiness and empowerment in the family unit.  It was the Las Vegas Police Department that originally referred us to Sit Means Sit and we are glad they did.  Fairfax, VA... here we come to bring harmony to every dog and dog owner.