Bali, Indonesia: Walk, Ride or Drive... that is the question.

The first thing you should know about Bali is that the roads through towns and cities and even highways are relatively narrow and in questionable condition.  Often times there is only room for one way traffic, though somehow these narrow lanes manage to support two way traffic even if that means using a sidewalk or grass.

I am more the adventurous type and found the easiest way to get around is on a scooter or motorcycle.  After my first day I was prepared to ride up into the mountains but when no less than 7 people told me I was crazy to do so I was convinced.  Their primary concern was that many people have become victims of large (for Bali) transport trucks flying up and down the inner highways.  Though after experiencing those same roads in a car, it wasn't nearly as scary as it was made out to be.

Adventure aside, if you can ride, this is the best way to get around Bali.  Flying half way around to world for business, fun or both to wait in traffic is not cool.  Think LA in some areas.  With a motorcycle you are through the traffic pretty easily.  Maneuvering between cars is not so bad when they are stopped or moving at 5 kph.

Also, if you decide to ride around Bali, carry cash.  While there are a decent amount of ATM's, enough vendors don't take plastic to make carrying cash necessary.  With the exchange rate, even if you are carrying a Balinese fortune it doesn't really translate into that much in US dollars.  Motorcycles and Scooters can be rented for roughly $30-$50 (30,000 to 50,000 rupiah) per week which is a killer deal.  You can rent 150cc Scooters up to 250cc motorcycles.  I recall reading an article around the same time about motorcycles in India having very manly names like Talon and Lion and Bali isn't different in this respect.  The hot motorcycle during the time I was there was the Honda Tiger (250) and it may still be today.  You won't find anything bigger than this to rent because they aren't allowed to be imported.  I did spot a Harley or Ninja now and again but after inquiring they are apparently black market or were imported as parts and rebuilt in Bali which is apparently a loophole in the law.
When cruising around Bali you will eventually need gas and there are two types of stations.  The more traditional gas station and the street vendor.  The few actual gas stations that I used were very nice.  They reminded me of the early days of auto transport in the United States.  The stations I saw were all well done, very clean and each pump had a smartly uniformed attendant standing almost at attention next to each pump, all lined up in the same holding position ready to serve.

The other, more common place to get gas was with street vendors.  The street vendors can be found at intersections around the various towns and they look much like hot dog vendors with a cart and sometimes umbrella. The primary difference here is that the cart or stand is filled with liter bottles of fuel and the liter bottle container of choice is the standard Absolut Vodka bottle.  Ride up, hand over a few rupiah and enjoy full service where they open the cap, insert funnel and strainer and pour the gas, close the cap and wipe any spillage.  In some of my more lengthy explorations these vendors were life savers as my fuel needle dipped toward empty while I was in the middle on nowhere.  And thank you also to Google Maps which was very helpful on my Blackberry in determining where I was.
The motor scooter is the primary mode of transportation for the Balinese and it fills the role of sole transport, economy vehicle, cool ride, family transport, off road vehicle and finally work vehicle.  I was at first amazed at the sheer number of motor scooters on the road.  I have watched scenes in movies or documentaries that showed this type of congestion and density of bikes but never have I been in the middle of it.  Beyond that, the versatility of use is amazing.  It was common to see entire nuclear families on a single scooter in the order of child, parent, child, parent all wearing helmets.

And then there were the labor crews that managed somehow to fit all of their tools and equipment on their scooters.

There is so much to see in Bali straddled on a two wheeler that you wont see staying near a resort or taking taxis and tour buses to your destination.  More detailed coverage of areas I visited will come in a later post but from rural to city there are fantastic places to explore.


As always with adventure comes some risk, and it was my third trip out that I had a painful motorcycle wreck that left me with a very large hematoma

While recovering and as a promise to my wife on the next trip I made sure I was on 4 wheels (though I did sneak some two wheel time in).  I found four wheel to be more difficult than a bike with right hand drive in the car and left lane drive on the road.  I used a Toyota Yaris and on more than one occasion smacked side view mirrors with oncoming traffic on those narrow roads.  I did appreciate the AC though as living in Las Vegas, Bali is a humid and sticky place... any escape from humidity was appreciated. 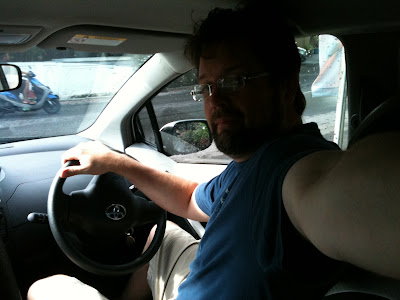 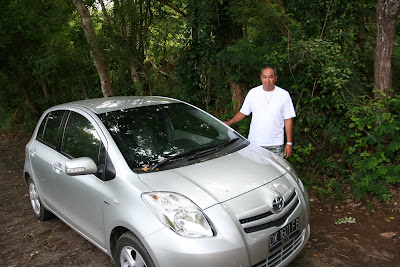 If you are adventurous, experienced on a bike and like to get outside the tourist corridors or just see Bali on your terms; two wheels is the way to go.  However, if you don't have much experience or are a timid driver firmly plant yourself in the passenger seat of a taxi or friends car and enjoy the ride.