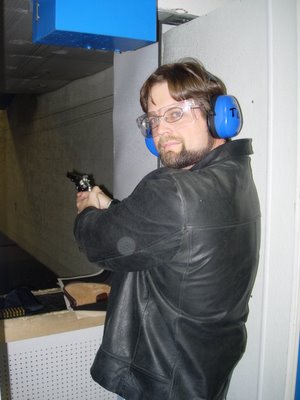 Today I felt like a shoot. All of my contracts were completed for the year... in fact I exceeded my year goal by some 125% or so when all is said and done and my goals this year were nearly 200% higher than 2004! Needless to say I was feeling good... so to celebrate why not blow off a few rounds with my 357 Magnum... a Smith and Wesson model 66 that was my grandfather's service revolver when he was on the Indiana State Police Board. 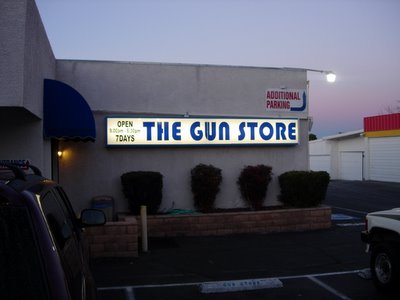 The place I usually go is The Gun Store, not the most original name but they have a nice indoor range and until recently carried the 357 frangible rounds (meaning no lead) as they don't want to breath atomized lead from standard rounds all day or worry about ricochets. Frangibles turn to dust upon impact with the steel back plate of the range.

It's nice to go in every once and a while and shoot off 2 boxes of ammunition (100 rounds total) I'm not bad either...

The only thing that gets me sometimes are the guys and sometimes, though rarely, women, who have an urge to fire an automatic assault or military weapon... good lord are they loud... when I went shooting today I had someone next to me with a .45 Thompson a WWII weapon but more commonly recognized with an ammo drum clicked in and a mobster rubbing out his rivals... then there was the M-16 and the AK-47 wow really loud.

I am tempted to rent one gun though and shoot off one or two clips... only because of the name... the 9mm Madsen M50 SMG... a Danish gun.