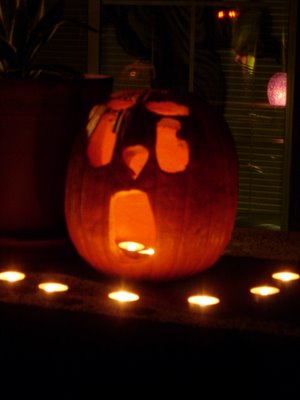 Wow, the first time I can remember the night ending with an empty candy bowl. I bought 4 bags of candy for Halloween night, 2 bags of Hershey miniatures, a bag of Reese's bars and a bag of Kit Kat bars. Most of the traffic was young kids with their parents. A few junior high and high school kids came by too... the junior high kids in costume, the high schoolers in civilian clothes on skate boards with this retro punk look... I am amazed and think it is pretty cool to see the punk rock style come back. Tight black jeans, black shirts with punk logo's and punked out hair with leather jackets covered with white out punk and anti-establishment slogans all over them. It's nice to see the youth of America getting back to a little non-conformity... punkers and intelligent design are like oil and water I imagine... however, punkers and Darwinism are probably like oil and water too! Man!

So anyway while waiting inside the door for trick or treaters I decided that I too would be in civilian clothes to had out candy... being 6'4" and 250lbs if I put on any of my scary stuff I would terrify the majority of my trick or treating audience who were primarily super cute youngsters dressed as mostly princesses or fairies if they were young girls or Star Wars and super hero types if young boys.

The tie for cutest was between an infant whom the parents had dressed in a skunk suit that had "little stinker" embroidered above the tail and a little girl dressed as scarecrow. She liked the carved and lit "punkins" as she called them on my patio wall... and I soon learned that "punkins" was to be her word for trick or treat, hello, thanks and goodbye.

While waiting for trick or treaters and Sonny to get home from work I was tearing through a great book by Colby Buzzell called My War. Mr. Buzzell kept a detailed journal of his experiences in Mosul, Iraq as an infantry army soldier in a Stryker platoon. He transitioned his journal to blogging and became one of the most recognized soldier bloggers and he later wrote this book... great and raw experience writing... hard to put down.

Sunny came home and it was dinner and a movie... since it was Halloween, a scary movie seemed appropriate so we watched Steven King's Riding the Bullet which wasn't bad.

As an adult I still kind of miss the mystery and atmosphere that I experienced when I went trick or treating... of course in our neighborhood I think there were about 7 houses decorated and our house was one of them... where are all the inventive adults and high schoolers who were around when I was a kid doing block and multiple house themes, with scary music, decorations and costumes to make trick or treating fun?? 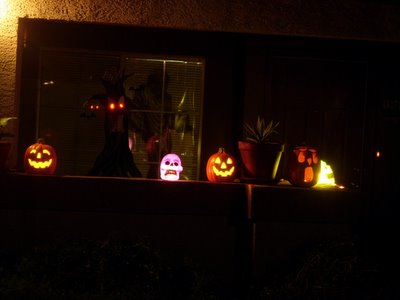 Great pics here and below. Sounds like you had a good time. Some excellent costumes. I might agree that there's nothing like Halloween in Las Vegas, but you should have seen the Greenwich Village Halloween Parade in NYC. My favorite "team" costume was a pie eating contest.

Hi there! I like your blog. I believe I'll have my blog in the future.
cya soon,
Rider