A little of the East in the West 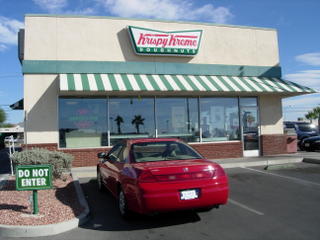 This isn't what I was referring to in the title of this entry but this is how my Sunday started out. I am eating a lot healthier these days but sometimes you just succumb to that food you know isn't all that good for you but damn it is tasty. That kind of warm, soft and fresh right off the assembly line with warm gooey glaze clinging to a warm doughnut. Well I volunteered to go out to get them and I never mind because I get them fresh! 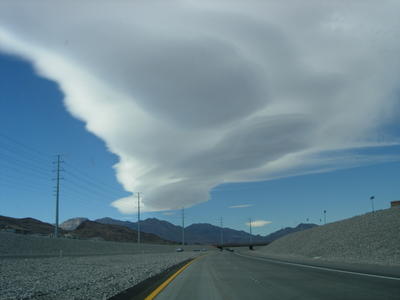 And... what a wonderful morning high 70's dry and windy. It was invigorating to drive out to the closest Krispy Kreme (about 8 miles round trip) with windows down, sunroof open and The Gypsy Kings pouring from the speakers. Bem, Bem, Bem Maria te quiero... bem, bem, bem... The wind was making some really neat cloud formations. 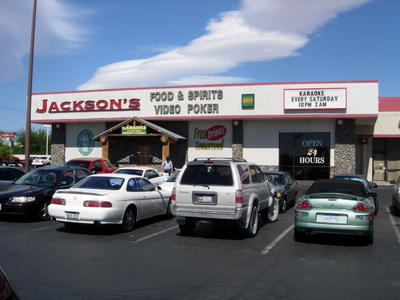 What I was referring to with the entry title of east meets west was the Redskins bar Angela discovered and let me know about. It is on Flamingo and Jones and called Jacksons. It is the Redskins Bar in Las Vegas... and I realized it when I started noticing more cars with Redskin jersey wearing drivers as I got closer to the bar.

I parked and walked in... wall to wall burgundy and gold. I haven't seen so many Skins jerseys in one place in a long, long time. I had forgotten what it was like to watch the Skins with a lot of other fans. And what a treat when a game as is close as the Seahawks/Skins game was... down to the wire... tied 17 to 17... Seattle lined up to kick a 47 yard field goal for the win with 1 second left. Their kicker had already hit a 53 yarder earlier in the game. The bar was tense and the old doom and gloom since Gibbs left was creeping into the room... the kick was off it looked a little to the left... PROOOONG! off the left goal post and if there was any doubt that it was no good the Redskins fans in the background of Fed-Ex field exploding to their feet erased it. No Good... No Good we are in overtime folks!

The bar exploded and we were all on our feet giving each other high fives. It was great... how long has it been since another wide eyed fan of any sport, that I didn't know, turn to face me like a brother with eyes wide and hands up in the air beckoning me to give the stongest and loudest high five I could produce... SMACK!

In OT it was more of the same we win the toss Smack... smack... smack... Brunell runs for the first down on 3rd and 13... Smack.. Smack... Smack... The Redskins kick the winning fieldgoal on their first drive and we were up on our feet jumping up and down searching the room for raised hands that were vacant of some other fans hands... high fives... low fives the room was crackling with energy... I hadn't experienced that watching a Redskins game since college in Virginia... a state that it is easy to find rabid Skins fans in. I walked out of the bar feeling charged up and great... See you next Sunday Jackson's.

I fly to Indianapolis tomorrow and won't be back till later in the week... so I may not be able to blog till my return but there should be some interesting stuff to write about... see you then.