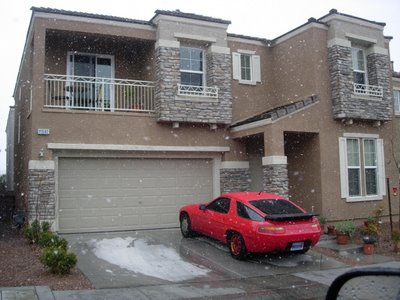 Well, Friday morning it snowed pretty darn hard. I had hoped for a little more snow this year in and around Vegas but no such luck. Last year there were several mornings I would wake up to snow capped mountains surrounding the valley... this year... not so much.

It was nice, however, to sit on my upstairs patio in the morning and sip some coffee while watching a snow flurry descend on my neighborhood.

The neighbors that were getting ready for work or work from home were out in force watching the flakes fall. Even the smell of snow was in the air... that sort of crisp humidity that is even more apparent when you are living in a desert climate. 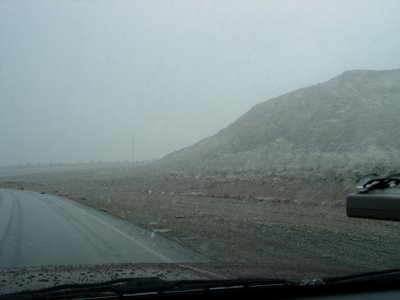 It didn't stick like last year but it was certainly fun to experience with a hot coffee and a cozy robe. Well, maybe next year will be better. With the Vernal Equinox around the corner on March 20th I don't hold out hope for much more snow, but I won't complain if it comes.

Is that your new house? It looks pretty cool. You should have had the Porsche turned around and parked at a rakish angle. I wasn't aware that it ever snowed in Las Vegas.