My weekend started off as a real transition from work to leisure time. Friday afternoon I had a client meeting down at the strip and we decided to meet at the Mandalay Bay Sports Book. Many times when meeting down at the strip in casino/hotels the easiest place to find and meet people is at the sports book. I am not a gambler so meeting at the sportsbook in no way reflects any type of gambling interest I have... it is more of a strategic move for ease of meeting people... every casino/hotel has one, there are always signs on the ceiling that point towards the sportsbook, it is rarely completely full and they are all called "sports book" not Charlies or Sportsworld or any other unique name... simply sports book.

I would have to say that Mandalay Bay is one of my favorite casino/resorts. It has a unique look and feel about it, the service from my point of view has always been good and they have a nice selection of restaurants and clubs to choose from. When I arrived at the sportsbook my client, Dale, had arrived a little early and was already up $100 after dropping a $20 in one of the video, bar-top multi-games. We had our business discussions in one of the many lounges peppered around the casino area, I was drinking Johnny Walker Black on the rocks and he was drinking Bombay and tonic. The meeting went well and it looked like his project was off to a good, if not very small start. We had started about 4:30pm and it was approaching 7:30pm when we were wrapping up. Dale asked me if there were any good eateries at Mandalay and wanted to know if I had time to get dinner before he headed out of town. 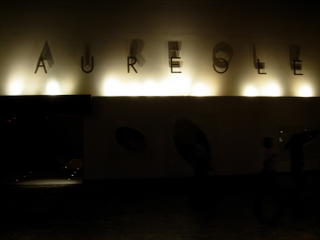 The restaurant we went to in Mandalay is called Aureole and is one of the more interesting restaurants I have been to in Vegas. Now I must apologize since my pictures of the establishment are blurry. It is a nicer restaurant and I didn't want to be popping off flashes during our wait at the bar or from the dinner table. The first thing you notice when you walk in from the ground floor of the casino is that you aren't continuing on to the ground floor of the restaurant. You enter on a suspended walk way with the floor of the restaurant 2 stories down and the ceiling 2 stories up. This design accommodates what equates to a four story wine storage tower made of Plexiglas. 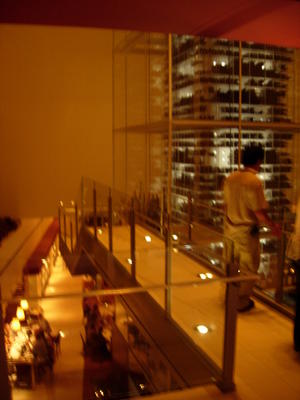 No matter if you are sitting at the bar or at a table if you want wine they have a great selection. However, it seems beyond most layman's mainstream wines so don't be afraid to ask. Or, if you are feeling particularly "in charge" even if you don't know wines that well just ask for the wine list.

The wine list is a compact computer notepad with a 14" lcd touch screen. Want to impress your group? The list is completely interactive... with tabs offering wines by type, country, pairing, etc. Find out what your table is eating and access the pairing menu to find what goes best with what entrees. apps, etc. and look like a real pro! I chose St. Supery Chardonnay... while I've had their Moscato (fabulous) their Chardonnay was to be a new experience... great bouquet and taste. 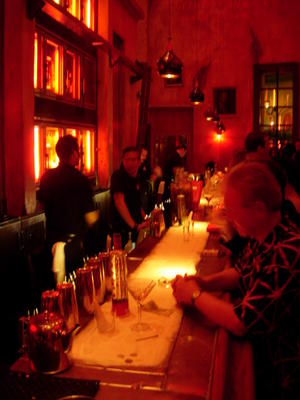 After a nice dinner, a stop by Red Square or Rumjungle (both in Mandalay) are good ideas depending on your mood. Red Square is a good Russian Vodka Bar for planting your butt in a bar stool and drinking fine Russian Vodka off of the frozen bar. Yes the white on the bar is actually ice so careful about putting your forearms down too long... but after a few shots... ahhh who cares. 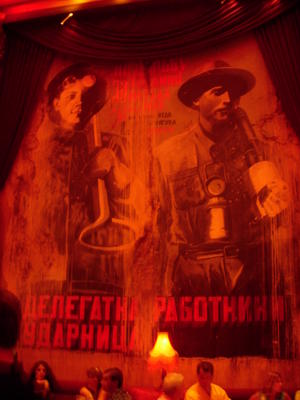 Rumjungle is an eatery by day and a hot dance club by night... so if planting your butt and shooting vodka isn't your deal then go next door to Rumjungle and sip on one of any number of exotic rums and rum drinks while getting down on the dance floor as girls dance with you, above you in cages and on the catwalks (purely PG-13 if you were concerned about the cages). Below is what Rumjungle looks like if you spend too much time in Red Square... 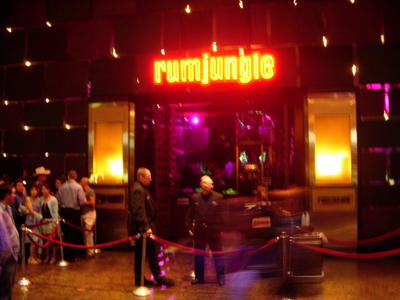 Saturday was all about RELAXING. It was morning breakfast at Egg Works on Flamingo. I have been searching for a good Huevos Rancheros since I experienced it in Colorado, in some small town, on the way back to Denver from Vail. Well Egg Works has it and a really good and varied breakfast menu. The service is great and the food comes out at breakneck speeds. Of course the version I enjoy is called Chili Rancheros there.

Sonny and I took sufficient time to relax by going to the VW dealership to look at replacing her 1996 Ford Explorer with a VW Turbo Beetle. Nice drive and nice car. We will probably stop by later in the week to work a deal on it. I, unlike most, savor hammering out deals at car dealerships and many friends and some family have benefited from my passion for getting a good deal. I am a bit of an insider however as I sold Audi, Mazda and VW for a time... and my Grandfather owned a VW, Audi, Porsche, Mazda dealership in Indiana (I never worked for him... too young) so maybe its in my blood a bit.

After our VW visit it was off to Red Rock Canyon for some hiking... strap on the camel back and we're off. It was a fantastic day for hiking and was in the low 80's, dry and breezy with very light cloud cover. 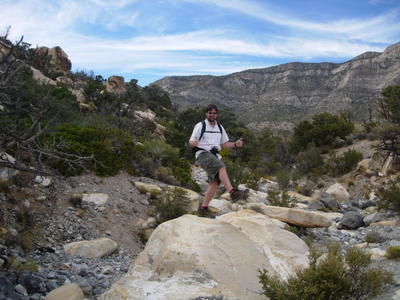 We did the White-Rock La Madre Springs Loop. The sign says difficult but it really isn't that bad. I wouldn't bring your grandparents out here though unless of course you don't like them. The beauty of the vistas down to the smallest rock are just fantastic. 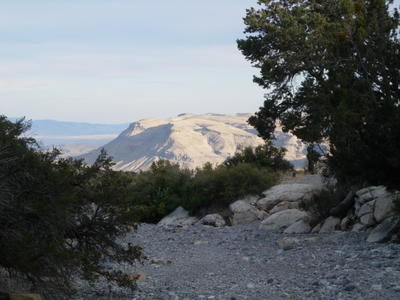 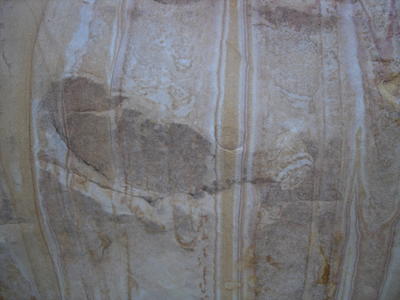 We didn't hike at a brisk pace as there is so much to look at and be in awe of. And during our hike we did see some neat flora and some not so neat, at least to Sonny, fauna. 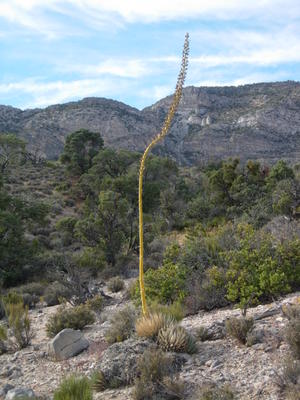 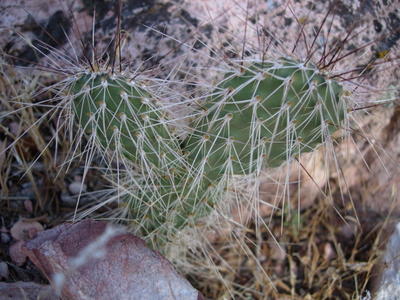 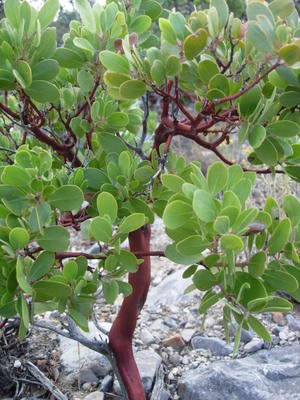 Now to the fauna that Sonny didn't like... it was a Tarantula about as big as my hand that was crossing the trail. I did the valiant thing and scooted it across the trail with my foot unharmed. That thing probably eats chipmunks for breakfast. 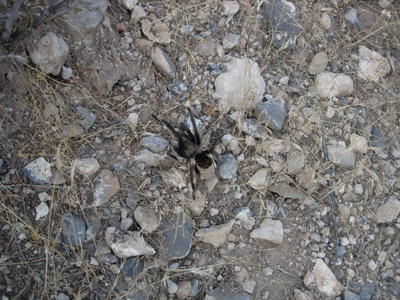 We had run into another couple hiking that had seen a pretty good sized rattler but after canoeing and swimming(not intentionally as I am no "Jackass") with alligators in Florida the only thing that would concern me out in the Nevada desert would be a big cat... and it didn't help that I read about their attacks and recently saw a Discovery or TLC special highlighting people that had been attacked by mountain lions.

Then I thought to myself, this is probably how mountain and desert people feel about going to the ocean and worrying about sharks or hitting Florida lakes and worrying about gators... no worries mate... just be respectful and attentive to your environment.

Now the animals we ran into that litter the desert up in Red Rock are the wild burros... 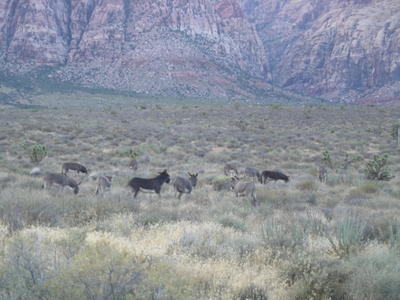 As for Sunday we spent the morning doing what you would call a fall cleaning and I set up our new hummingbird feeder and replanted some new plants into terra cotta pots... Lavender and Agave... maybe I can make some lavender tequila???
Posted by Ted Madsen at 5:50 PM

I like the tarantula, but I bet it would have a tough time eating a chipmunk. Great hiking pictures. Keep on shooting and posting.

I don't like the tarantula, but the flora is beautiful (and the views are too). When we get out there, we'd love to hit the trail--and Red Square, of course--with you guys. (No elbows on the bar!)