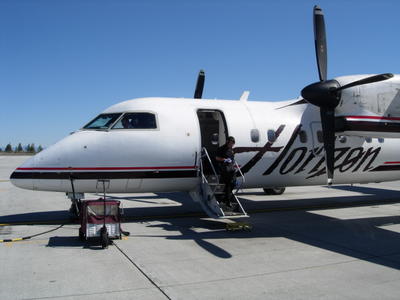 What a great area. You have to fly in via turbo prop so if you don't like that... plan on flying into Portland and making the drive. It's a short hop really... about 35 minutes by plane. If it's no problem then take the plane and maximize your time in Bend. The actual airport is in Redmond which is only about 30 minutes from Bend which is south on 97. The Deschutes river runs right through the oldest part of Bend and a bend in the river is what the town is named after.

I was only going to be in Bend for one night. I arrived at about 12:30am and had client meetings lined up through about 6:00pm... the next day was also a full one and I planned to fly out about 3:00pm.

The entire Bend area is on top of ancient lava flows and there are a lot of interesting geologic features... one of the more interesting(at least to me) are the giant lava tubes. These tubes are formed by surface lava cooling while ultra-hot lava flows through the hardening lava like arteries. At some point the lava flow stops because of cave-in, blockage or the eruption ceasing the supply of lava. The super-heated lava runs out of the tube like water running out of a drain pipe leaving a hallowed out tube. Since lava is pretty structurally sound the tube remains and rarely caves in... what happens in most cases is that sediment left by seeping ground water eventually fills the tube with dirt. If you are in Bend make sure you hike Lava River Cave which runs about 1.5 miles underground before narrowing because of sediment.

One of my clients has a Nicholas and a Fazio designed courses on property. While Fazio's crew was blasting to create a canyon themed hole they discovered a very large lava tube. There are plans to turn this cave into a wine storage area and hold tasting events in the same area... don't be surprised if, when finished, this particular hole doesn't show up in all kinds of golf magazines. 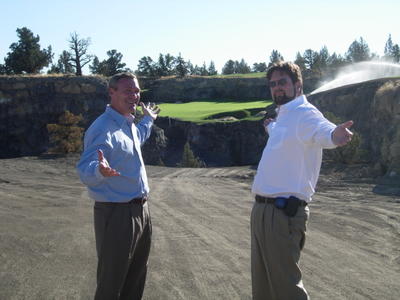 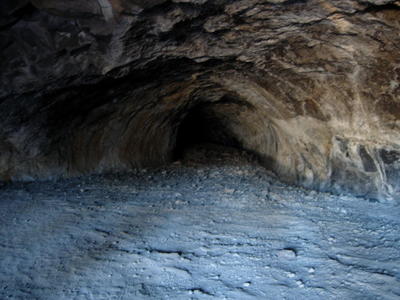 After meeting all day with clients I had worked up quite an appetite and where better to take care of that than downtown Bend. There are some great restaurants all within about a single block. That night it was all about Merenda... a San Francisco style eatery with an interesting and unique menu. There are two other restaurants that I enjoy in Bend as well... Cork with its extensive wine list and great food and Toomies, a Thai restaurant that surprised me with how good it really is... I'm used to great Thai in metropolitan areas but Toomies proved me wrong. down town 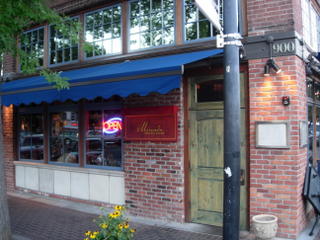 n Bend is also just a really nice area... like an old western town.... not overrun with branding either though there is a Starbucks near the edge of town... most other businesses are originals... even the theater is a throwback with a big multi-light marquee.

After dinner and a walk around town it was time to check in to my accommodations and relax. I chose to stay at The Inn of the 7th Mountain. They are sort of southwest of downtown... about a 15 minute drive... its a nice resort with large units that are on a bluff overlooking a lake and part of the Deschutes. They have pools, a newly opened restaurant and bar along with a skating rink in the winter. Store, hiking trails... nearly everything you need to have a nice relaxing time... unless you are on business like me :0.

I checked in, dropped of the bags and went down to the bar to have a Johnny Walker Black on the rocks and watch the rest of the Skins/Cowboys game... it got a little harry but can I say... "Hail to the Redskins!" 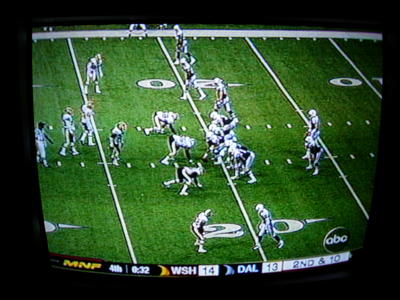 The next morning it was gorgeous outside and I have to show you the view from my deck at the INN. 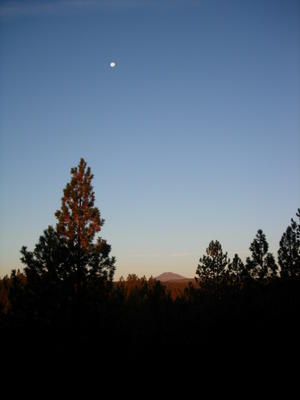 I had to push my flight back to 5:40pm because I had to extend a meeting. I did have an opportunity after meetings and on my way to the airport to drive up on Pilot Butte and take some pictures. 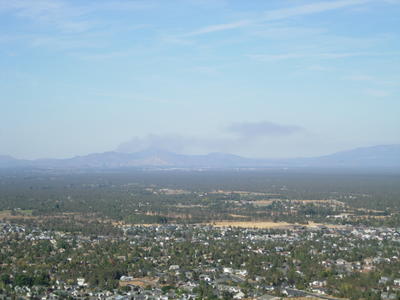 It is like this giant mound that rises up in Bend that provides a great 360 view of the area. I arrived back in Las Vegas at about 12:30 am and took this shot of the strip from the top of the airport parking garage. 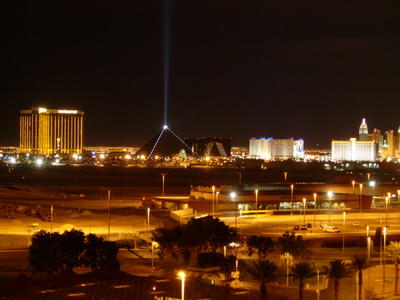