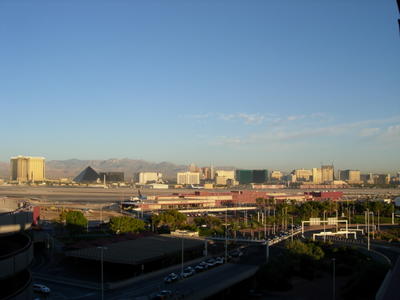 As I am writing this I am sitting on an Alaska airline flight to Portland with a connection to Redmond Airport. It wasn’t too difficult getting up at 5:30 this morning as I knew all packing was done, clothes laid out for the trip and a quick shower, shave and getting dressed was all that was standing between me and hitting the road. The drive to the airport usually consumes about 30 to 45 minutes of my time and with an 8:00am flight I wanted to get there by at least 7:00am.

It seems to me though, when I have everything ready I tend to dawdle a little more as I know I have time and there is no rush… well I dawdled myself into 6:25am and wasn’t in the car till about 6:30am… not leaving much time for any traffic issues or any issues for that matter.

So I was off… and note to self… I need to get up this early on a weekend and head out to Red Rock Canyon. It looks fantastic as the sun rises and casts its early morning light on the mountainside that has broad strokes of red, sand and black rock. I would have pulled over and snapped a shot but tick-tick-tick went the clock.

The drive from my house to the airport on most occasions has me using the 215 or the Las Vegas beltway… It has been getting better as they complete sections but there are still areas that are not finished so you go from 60-80mph to 0mph at stoplights on the freeway. Because parts of the central throughway are still under construction the road diverts in certain areas to what will eventually be exit ramps but now serve as the main road… and what are at the end of exit ramps that lead to local streets? Yes folks, stop lights.

So I was zooming along toward the airport… passed Sahara, passed Flamingo, light at Tropicana… no slow down up over the rise and holy crap! Traffic is backed up about a mile to the next light… 6:40am.

I was going to check my hanging bag but I have carried it on before… so I strategize as to how I can put one of my 2 carry-ons (an LCD projector) in my hanging bag so as to avoid the whole bag check procedure to shave valuable time off the getting to the gate process.

Parked the car, packed the bag, I-Pod on… start walking. Hit the elevator down to the ticket level, which really isn’t the ticket level but has the most direct access to the ticket level across the airport and one floor down. Walk into the airport and conveniently there is the every airline check in kiosks right there. Check in and bam my gate is a D gate, which is also right there. No line in D gate security but C looks like torture for anyone in a hurry… all the way through the zigzag and down the hall.

So I hit my normal security ritual… laptop out and in tray, blackberry, headset, I-pod in the trey with my shoes and my car keys clipped inside my laptop bag. Now normally if I am traveling I wear my cowboy boots or slip on dress shoes but not this time because of the particular suit I was wearing and I have only laced shoes in oxblood (or cordovan as they like to call it now). Oh and I wear a shirt with a pocket so that my boarding pass is visible to the security personnel. Because I now had to put my shoes on and lace them I sat next to a nice older couple also tying their shoes. The woman made the observation that “they (I assume she means “The Man”) sure aren’t making it any easier to travel.” Borrowing from Carlos Mencia, the comedian I said, “If you want to avoid all this just airmail yourself… they don’t check.” Both the man and woman busted out laughing and the man said, “Yeah like that one guy did a couple of years ago. Maybe we will… at least we can keep our shoes on.” Strange that was such big news. I don’t think this was the couple that would be watching Carlos (this was his DVD that I was borrowing from, not his TV show on Comedy Central) I guess that is what good comedians do is bring things into their routines that a large number of people may not have on their current radar but haven’t forgotten. 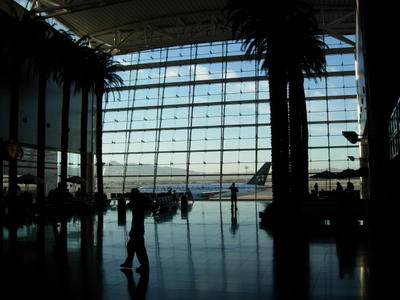 I arrived at the gate at 7:15am not bad… boarding begins at 7:30am, I now have an aisle, exit row and all I need is a little food and I can relax. Wolfgang Puck made me a nice chicken ceasar salad with a bottled water. All aboard!

Oh and those one armed bandit pullers??? They don't stop till the wallet is empty or they hear their names for the third time over the PA system to board the plane. 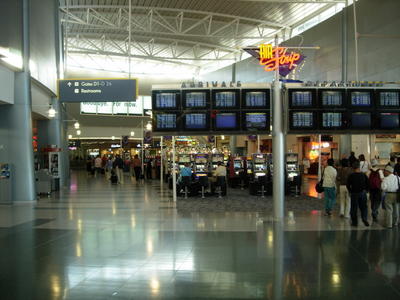