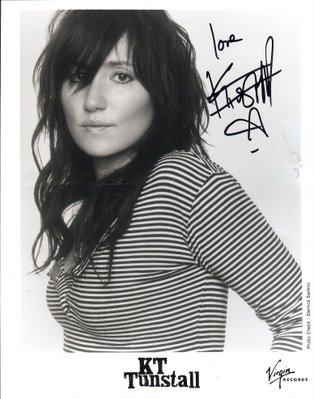 I had a great opportunity to be part of a private concert set up by Travelocity with KT Tunstall, the Grammy Award Nominee. She has been nominated for her song Black Horse and Cherry Tree. She is like 6 times platinum in the UK and is 1 time platinum here in the US as she begins to be recognized. When I went to the concert, I did not really know who she was nor was I familiar with her music or so I thought. However, when her music was being pumped through the sound system I recognized a few songs that I had heard on the radio like Suddenly I See. Because of my wife's relationship with Travelocity we arrived early and had an opportunity to sit down with KT. At first I suppose I was surprised by her small frame... I am 6'4" and she must be about 5' and very petite and understandably a little withdrawn meeting all these people she didn't really know but was open to questions and I recognized an underlying wit and depth of personality and decided I liked her right away and thought to myself, she would be a great person to sit down with, have a Guinness and a great conversation.

After about an hour of meet and greet, about 60 radio award winners filed in to enjoy a private concert with KT. I spoke to a few of them and they were from all over, Alabama, Washington, Mass... and were very excited to have won a trip to Vegas and a private concert.

I snagged a table at the very front of the stage for our party of 4 and the concert began. KT brought only her guitar and some Taiwanese instrument that would sample sounds that she set up before starting a song to either add back up vocals or percussion by beating out a rhythm on the face of her guitar or stomping her boot or both...

I have to say she is a great performer... her guitar was crisp and her voice was strong and clear... she won me over as a fan and as I write this I am downloading her album off I-Tunes. She would pause every couple of songs to do a Q&A with her fans and she proved further that she is quite funny. If music hadn't worked out for her she might have been great at standup.

And, I can't forget to mention that a big part of her involvement with Travelocity for this concert is due to their alignment on the environment. KT is a proponent of reducing pollution that leads to global warming while Travelocity is promoting a program (GO ZERO) where customers can zero out their emissions through a Conservation Fund program that will pay for the planting of trees and replenishment of wilderness areas to reduce CO2 and produce oxygen (of course this only happens through Photosynthesis during the day and at night the respiration process releases CO2 but at a much lower rate than it is consumed during the day).

The concert was held in a very small and cozy venue at the Flamingo in Vegas... after the concert we headed out to continue the celebration an a couple of bars on the strip... fun, fun!
Posted by Ted Madsen at 11:34 PM