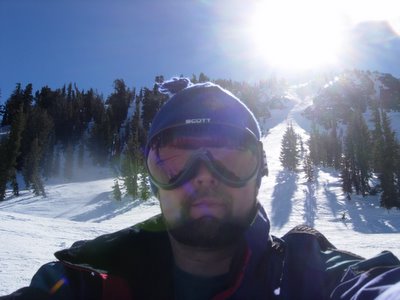 Had a big training session up in Mammoth this past week and stayed over one day to do a little snowboarding. I decided to drive again because as I mentioned in an earlier entry the 4.5 to 5 hour drive is better than the "arrive an hour early at the airport, fly to Reno for an hour, get bags and rental car (30 minutes) and then drive 3 more hours to Mammoth down a heavily patrolled piece of highway (some clients and coworkers have speeding tickets on this leg)."

4.5 hours averaging about 75mph and no traffic isn't bad. The packing is easier too when you can throw it all in the back of your SUV. The trip out was pretty uneventful as I left Thursday morning. I did get to see the Thunderbirds practicing over the Indian Springs Airforce Auxiliary Field off of route 95. That was pretty cool as they were practicing formation flying and some stunts... I tried to get a picture but they weren't trailing the traditional smoke trails as this wasn't a public event. 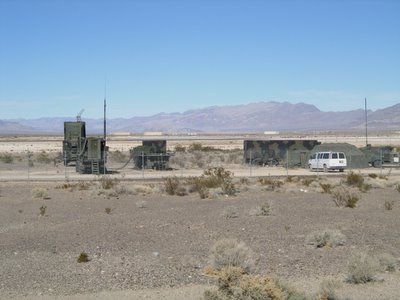 My I-Pod I-Trip is a real life saver on these trips though... when you are traveling out past area 51 there is absolutely no good radio... even in Mammoth Lakes. So I take my 20GB Ipod and tune it to 100.1 FM a non station for the trip and broadcast directly to my car stereo. So far I have enough music in my I-Pod that I could listen for 4 days straight and never hear the same song. 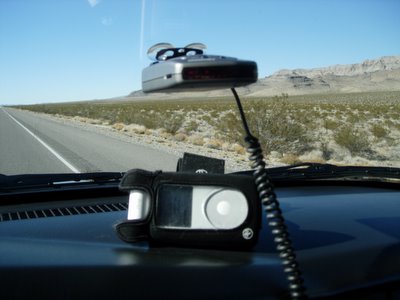 It is weird though, driving through the desert that is so barren and was about 60 degrees to climbing up into some barren mountains only to come out on the other side to spectacular snow covered mountain views, plants of all sorts and animals... like the wild horses in Fish Lake. 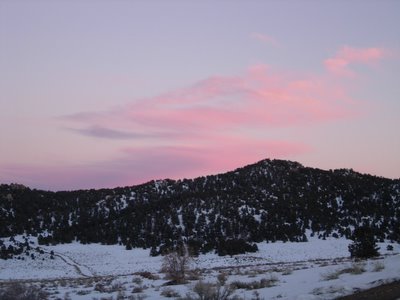 My friends Amy and Kat decided to go snowboarding... well Amy decided that skiing was more her style, on Saturday morning following a full Friday of training agents and brokers. 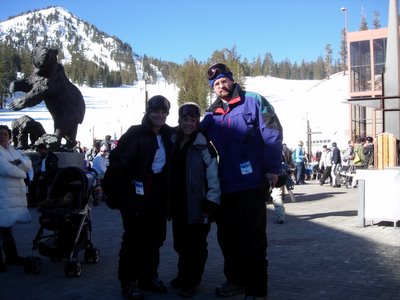 Amy took a lesson and Kat wanted to get her snow legs on gradually so while Amy headed to class and Kat headed to the greens I headed for the blues. It was a perfect day... sunny and about 50 degrees at the base... I ended up after my first 5 runs just dropping off my sweater and just wearing my long underwear shirt with my ski jacket unzipped and all the vents on my Burton snowboarding pants open... some people were out there in t-shirts and no jacket. 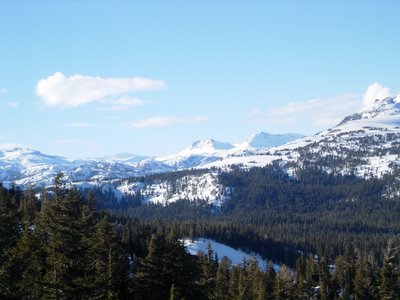 My 3rd run was interesting as I am still learning this mountain...I went up lift 16 which is called "Canyon Express" and was going to take what Mammoth labels as a blue-black run called "Downhill" and made a wrong turn ending up on a black called "The Acts." I like blues and blue-blacks because they are fun to challenging for me at my skill level but the blacks are a bit too challenging and snowboarding moguls isn't my idea of fun... at least not yet. I handled it well and didn't eat it but it was slow and cautious... at 36 I know I am not invincible.

The great thing was that I didn't wipe out once... I had a near high speed wipeout and I wish I had it on video as a sort of Ted Sports Center highlight as I lost control on a blue-black and over corrected, over corrected that correction and then 2 more before recovering... it felt like a series of 180's and 360's and I was spraying snow everywhere but I was on my feet at the end headed down the mountain... awesome! The 6 days a week working out is paying off BIG TIME! 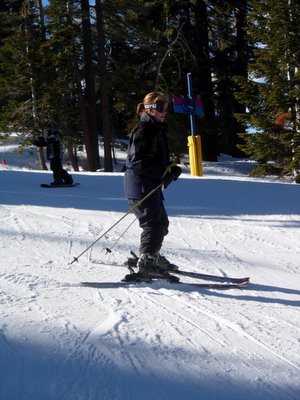 Amy's lesson ended about 1:00 pm so we met up for a quick bite to eat and all headed out so we could hit a few runs together... as Amy was getting her mountain ski legs on after lessons at the base we hit a couple of greens and of course I led us astray and we ended up on a blue for a short bit and Amy took it in stride. One thing for sure though... boards are hard to control at low speed with gradual slopes like the greens we were on. 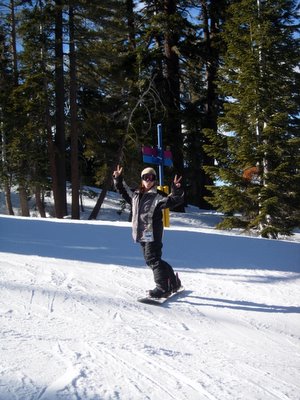 It was a great day and I was boarding from about 10:00am till just before they closed the lifts at 4:30pm... and then, after dinner, drove back to Vegas... I was tired but glad to be in my own bed!

It looks like a lot of fun. Isn't Mammoth Mountain the place where like 300 skiiers and snowboarders have been killed this season so far? Be careful out there.