Time Warner's Home of the Future 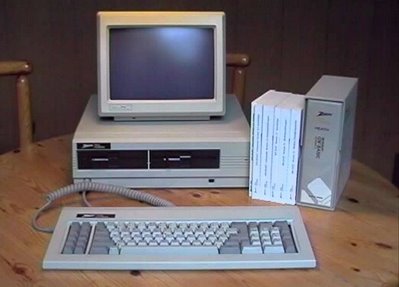 I was reading my January 22'nd New Yorker today and read in the second article under the Talk of the Town section titled Our Changing World about the home of the future model by Edwin Schlossberg hanging in the lobby of the Time Warner Center.

It discussed ideas about laptops in kitchens to look up receives and it made me think back to 1986 when my father Carl Madsen was way ahead of the game in that respect. You see in 1986 when I was a Junior in high school, my parents purchased their first new home... so new in fact that it hadn't been build yet.

My father having working in the computer industry for years with companies such as A.B. Dick, Phillips Micom, Zainax and PRIME was working with what was the leading edge technology. We built our first family computer which was a Zenith Heathkit 80/86 processor with a single 5 and 3/4 drive, 10 inch amber monochrome screen, 20 MB hard drive (yes that is 20 Megabites... I have word documents larger than that) and 16k memory. And for those of you that build computers these days it wasn't nearly as simple as the snaptite proposition of a computer build today... I love reading the forums on overclockers and the tweaks they make to their cmos and cooling... whatever! Imaging standing on an anti static mat, with all of your desktop work area on an anti-static mat and your ankle and wrist attached to bracelets with wires running to said mat? Why all this protection? Because back then you didn't buy a mother board or graphics board with everything soldered on already... you had to do it yourself. soldered chip anchors to the mother board along with diodes, resistors, transistors and every other istor you can think off. Then after you've soldered about 300 different things to the Mobo, but it in the case, soldered 200 things to graphics and modem... you plug it all in and hope you didn't screw one thing up. Guess what... we plugged it in and it didn't work... not because we made a mistake... it was because we had a bad power supply... after replacing that we were off to the races!

Anyway I am getting way off point here. Then new house that was being built, after the framing went up was going to be our house of the future in more ways than one. My father and I went through the house with (I wish I could remember the classification of the wire we ran) half inch think bundled cable that contained enough small wires in it to connect three parallel ports if I recall correctly. We ran these wires from the master bedroom, office, kitchen and living room all to what was planned to be a server room in the basement.

During this time we purchased a second computer similar to the first but was an 8088 with faster graphics... an old Hercules card and we didn't have to build it. We then, mostly my father with me looking over his shoulder started sketching out the plans to have a monitor and laser pen in the kitchen to read the bar codes on our groceries to keep a running inventory and automate the grocery list, put a monitor in the bedroom with speakers that would work as an alarm clock and daily planner with reminders for events and tasks and in the office run multiple PC's that would be networked through a mainframe in the basement with multiple printers and dial up to CompuServe in D.C. (CompuServe was about 6 bucks an hour to use back then) This was all pre-internet. I liked the idea because it would be super cool, I would be the only kid on the block and probably in the region if not the U.S. that had this sort of smart home.

Alas, it did not come to fruition but if Mr. Schlossberg wanted to get a head start on the home of the future our old house is prewired and ready to go in Fairfax, VA...

P.S. My father e-mailed me with this update...

The house was built in 1984. We wired it as a "homerun" and not a "daisy chain" so each individual cabling terminated at a single Telco punch down block. We used 25 conductor, shielded with drain cable terminated at plastic electrical boxes with DB25 female plugs and a coax connector. We could have run anything (telco, thermostat, video, computer, printer,you name it) through it. Unfortunately, our concept was ahead of the technology and software available at the time. (Unless you were willing to write your own programs in BASIC, build the interfaces, spend a LOT of bucks, and be willing to troubleshoot the glitches in your very limited spare time. Naaaaah.) But, it's much easier to run cable before the walls are up! Wonder if the current owners did anything with our "home of the future."
Posted by Ted Madsen at 5:46 PM

Glad to see you back blogging. Keep me posted on life in Vegas.