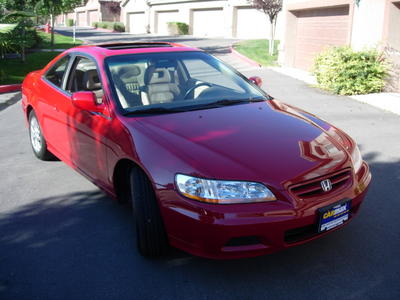 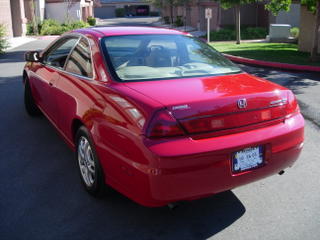 So this is the Turbo Beetle we looked at... well actually it's not.

This deal was solo Sonny... when the VW dealership was using some old school car sales moves like,"little lady why don't you talk to the man of the house" and changing deal points we had discussed earlier when she stopped by alone... it was time to go.

She went to CAR-MAX (great place to buy a used car) and traded in her Ford Explorer for a 2002 Honda Accord V-6 with leather and 20k miles. I didn't know that she'd bought it till she pulled up to the garage, called me on the cell and said, "come down and see my new car."

Honda was an interesting choice and it certainly looked sharp... I say interesting because Sonny has always been an SUV person even when she didn't own one. It didn't have to be the flashy top SUV she just always liked 4x4, leather and sitting up high.

I've never owned a Honda myself but I have owned two Japanese cars and both were Mazdas. This got me thinking about past cars and my exploits in them... though only 2 have been in the west. My car history follows these lines... (Also some of these images are not of my actual cars as those pictures would have to be found in a storage unit... I don't have the time for that undertaking) 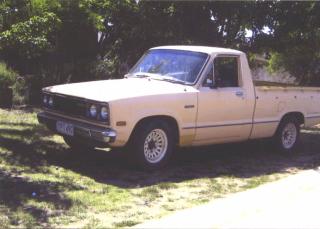 (Not my Actual Car)

This was my very first car and a hand-me-down from Dad. It served me well and I even had a little mulch business for about 2 deliveries... I found I didn't much care for customer satisfaction issues at that age. Eventually I sold it to a guy I worked construction with for $200 in 1986. The most unique features I recall were its orange color, a real solid steel rollbar and if I locked my keys in the car I could reach through the rust hole in the floor and get them or at least unlock the door. 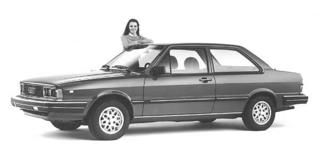 (Not my actual car)

I had the use of this car as a sort of loaner from my folks. I gave it up when it was in the shop more than on the road. It was brown and not a very attractive brown at that, but man could it handle and that straight 5 Audi put in those cars purred... the electronics and front universal join boots were for shit and it had a super touchy clutch. I remember hotwiring the cooling fan by hooking it directly to the battery with a fuse in line and a switch mounted on the hood that I could flip by reaching out of the front window. Hey... better than Audi shop prices. 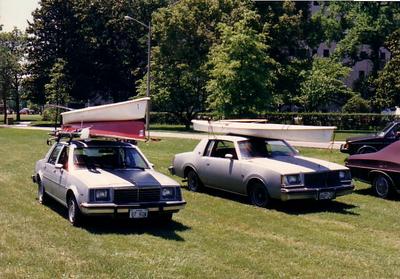 This was the car that got me to college. I bought it from my neighbor in 1986. He had been holding it for his son... but as his son was to spend the next 5 years or so in jail... he had no more reason to hold it. He told me that I was what he wished his son had turned out to be and he offered to sell the car to me for a $1. We knew each other alright I suppose and I used to help him occasionally when he needed a strong back. He would have given it to me but the dollar transaction avoided taxes.

It was a good car for about 2 years so I definitely got my monies worth but when the fuel pump went bad and me and a college friend Poncho (nickname) fixed it... It was only days before the timing chain broke... back to the shop... then it was only hours before a piston rod shot through the oil pan... dead! So it made a nice donation to a highschool shop class... rebuild the engine for the semester... a decent tax write off too. 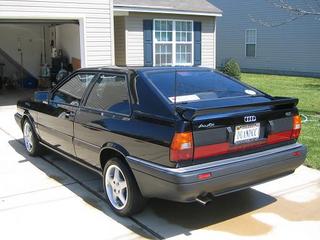 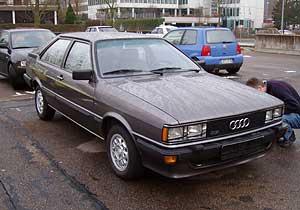 (Nope, though the one on the right is as close to an exact match...)

My Buick replacement in college. My Grandfather comes to the rescue... I was, being in college, about to buy a 3.2 mile to the gallon Oldsmobile that I swore was a converted WWII Destroyer. It was to cost me $800 bucks that I could barely scrape together and the transaction was neigh when I got a call from Mom... Papa, as I called my Mothers Father, was going to give me his Audi GT Coupe! How cool was that!

So now I was styling in a 5cyl silver Euro Sports Coupe! I drove it back thinking no one was going to have a car like this as coupes were pretty uncommon... I pulled into my new college apartment nicknamed "The Arc" because it was all wood (different story) and lo and behold there was another silver Audi GT coupe... I still remember the vanity plate he had PFORZE whatever that meant. So I wasn't going to have the most unique car on campus but I wasn't hurting for wheels either! It eventually was sold to my friend Chris when, with what I was paying in regular maintenance I could have bought a new Audi. 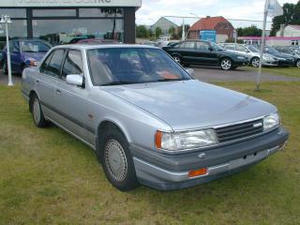 The Career Search Begins. I moved to Orlando to pursue my career in 1994 and I needed a car to chase it... so I picked up a silver 929 from a wholesaler and got a pretty good deal. It wasn't bad.. I was freelancing and working nights at Sloppy Joes on Church Street as a bouncer... mainly to add some spice to my social life in a new town.

It was when two Hooters girls I knew made the comment "nice family car" that it was time to start thinking about the next car... and it wasn't too much later that I was rear ended on the way to an Orlando Magic game... fate? 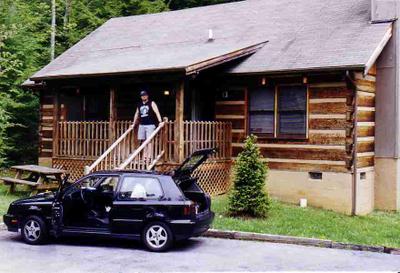 Me and my GTI in Gatlinburg, TN

It was time for a new car and since the 929 was approaching the 5 year can't finance period (after 5 years most cars cannot be financed so they lose a lot of value) and had a smashed trunk it was time for a change. I was working at Aristocrat Volkswagen in Florida to supplement my spotty freelance income and I wrote myself a sweet deal on a Black VW GTI. 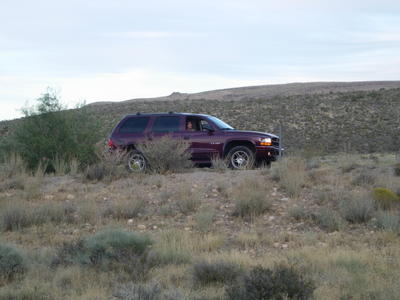 I was now the proud part owner of a Bayliner Trophy 2052 off shore fishing boat and it was getting a little tiresome having to borrow a vehicle or rent one to tow the boat... so Carmax online had the key in 2003... I wanted a Burgundy Durango SLT 4x4 but when I saw the R/T which exceeded my expectations in both features over the SLT and price I bought it via web and flew out to Las Vegas to drive it back to Orlando... Vegas to Grand Canyon/Flagstaff to Albuquerque to Dallas to New Orleans to Orlando... great trip! 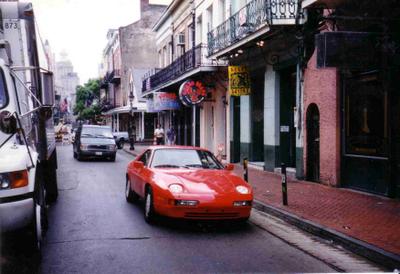 Originally my Papa's and the darling of cars past, present and future.

So I took Sonny's new Accord out for a spin and was impressed with the fit, finish, power and handling.... all in all a nice car. And a hell of a lot more reliable than the Ford... I imagine. Great Job Sonny!

And I wanted to add these two photos that I found while looking for shots of my old cars... and since these are car related... 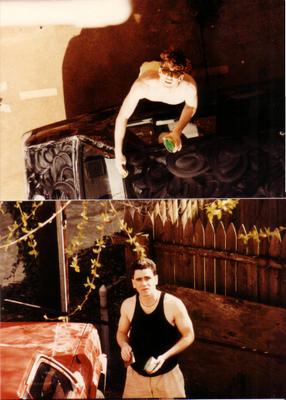 It must have been a good day for Vic and John to wax the cars in Norfolk, Va...

Living in NYC, car ownership can be a real hassle. Here's a list of cars I have owned since 1992 (presumably when that car-waxing photo was taken):

Even the earlier version of Fiat has been successful release in the auto market. This American car is a good choice for small car. I was impressed on its performance and reliability. This is my top choice aside from Toyota cars.